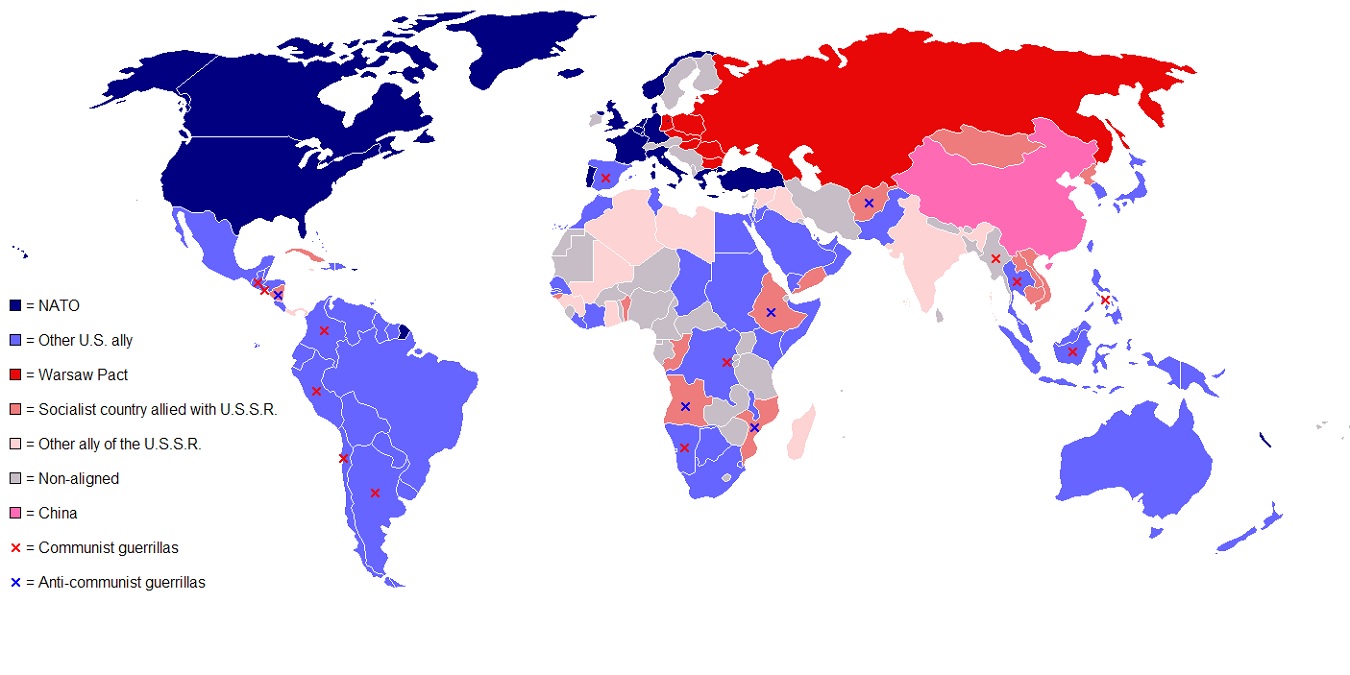 After World War II, the capitalist US and communist Soviet Union (the USSR) were the most powerful countries in the world. A period of great tension began, as each side tried to prevent the other from gaining too much power.

The invention of nuclear weapons created an additional threat. This is known as the Cold War, because conflict was fought through political ideas rather than military force.

After World War II, the USSR takes control of areas of Eastern Europe, including East Germany, forming a communist "Eastern Bloc." The US helps to rebuild western European countries. Eastern Europe becomes cut off from the West.

The USSR flexes its muscles by preventing road and rail access to West Berlin, threatening West Germany. Britain and the US drop millions of tons of supplies into West Berlin from planes until the Soviets lift the blockade.

The East-West divide becomes official when the US and Western European countries establish the North Atlantic Treaty Organization (NATO), promising that in times of conflict, these countries will help one another.

British author George Orwell writes 1984, a novel that imagines the nightmare of living under a brutal government similar to a communist dictatorship. It inspires many books, movies, and music.

In response to the US nuclear bombs that ended World War II, the Soviets become a nuclear power by testing their own weapons. The US and USSR compete to have more powerful weapons than each other. Neither of them ever actually uses these because they fear mass destruction.

A scandal erupts when some US government officials are caught giving American secrets to the USSR. Senator Joseph McCarthy mounts a campaign to hunt down rebel US communists, but innocent people are prosecuted in the process.

After being recruited as Soviet spies while at Cambridge University in the UK, four British men are discovered to have been passing secret information to the USSR. Three of them are forced to move to the Soviet Union, and one shares Soviet secrets in exchange for his freedom.

The USSR unites the Eastern Bloc through the Warsaw Pact which, like NATO in the West, creates an agreement that the countries will support one another. It strengthens Soviet power over the Eastern Bloc, too.

The US and USSR compete to advance their space exploration. Their progress represents the scientific and economic power of each country. It ends when American spacecraft Apollo 11 lands on the Moon.

During the 1960s, the US government funds a project by DARPA (Defense Advanced Research Projects Agency) to develop a way to share information between military computers quickly, and so the internet is born.

German communists erect a wall dividing East Berlin from West. It becomes an ugly symbol of division between the two Cold War political ideals. The wall separates many people from their families, homes, and jobs.

The USSR builds nuclear missile launch sites in communist Cuba, close to the US coast. The US demands that the sites be removed. Nuclear war seems inevitable. However, the Soviets withdraw at the last minute.

In the "match of the century," American Bobby Fischer beats chess champion Boris Spassky of the USSR. This ends 24 years of Soviet domination of the World Chess Championship.

US president Ronald Reagan calls the USSR an evil empire. He reveals a plan, called "Star Wars," to put weapons in space. These would defend against a nuclear attack, and show off US wealth and technology. However, they are never built.

As the USSR weakens, East Germans are astonished to finally be allowed to travel freely to West Germany. The wall is knocked down, and Germany is reunited. This marks the end of communist rule in Eastern Europe.

For the first time in its history, Russia elects a president. The Communist Party is defeated and ordered to end its rule. The world looks on in amazement as the USSR disintegrates into 15 separate countries.