Mock Tests for JEE Based on New Pattern

A point particle of mass m, moves along the uniformly rough track PQR

A point particle of mass m, moves along the uniformly rough track PQR as shown in the figure. The coefficient of friction, between the particle and the rough track equals μ. The particle is released, from rest, from the point P and it comes to rest at a point R. The energies, lost by the ball, over the parts, PQ and QR, of the track, are equal to each other, and no energy is lost when particle changes direction from PQ to QR. 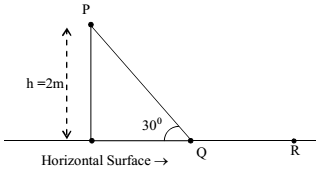 The values of the coefficient of friction μ and the distance x(=QR), are, respectively close to:

Since work done by friction on parts PQ and QR are equal,

The correct option is B.

Get Free eBooks at Your Email